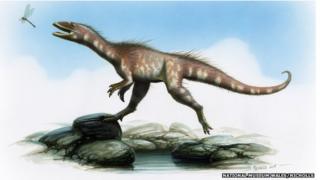 This is an artist's impression of a meat-eating Jurassic dinosaur that was found on a south Wales beach in 2014.

The fossilised skeleton is only now being revealed to the public for the first time.

It's a small theropod dinosaur.

That's a distant cousin of the giant Tyrannosaurus Rex.

It would have stood at about 50 cm high and about 2 metres long. 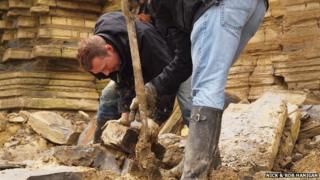 Fossil-hunting brothers Nick and Rob Hanigan found it at Lavernock, Vale of Glamorgan. There had been a cliff rock fall.

They have now donated it to the National Museum Wales.

Experts there believe the fossilised remains date back more than 200 million years to the very earliest part of the Jurassic Period.

The theropod is the first meat-eating dinosaur fossil to be found in Wales.

It's also one of the oldest finds from the Jurassic Period in the world.

The fossils show it had lots of small blade-like teeth. That suggests it lived on insects, small mammals and other reptiles. 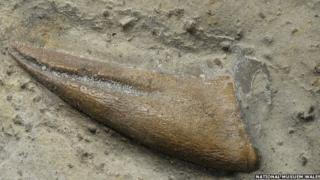 National Museum Wales
One of the Dinosaur's fossilised claws

The brothers spent last year carefully preparing five stone blocks to uncover the full fossil, before getting in touch with museum experts. 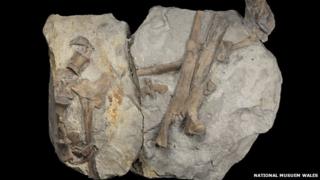 "This is a once-in-a-lifetime find," said Nick Hanigan. "Preparing the skull to seeing the teeth of a theropod for the first time in 200 million years was fantastic - you just can't beat that sort of thing." 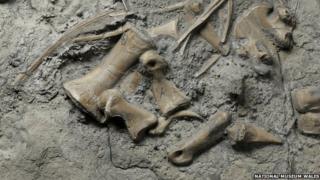 His brother Rob said, "It has always been our intention to donate our dinosaur to the museum for the public and scientists to see and research." 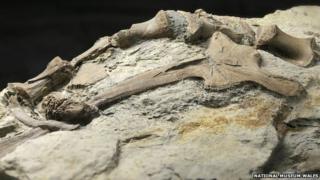 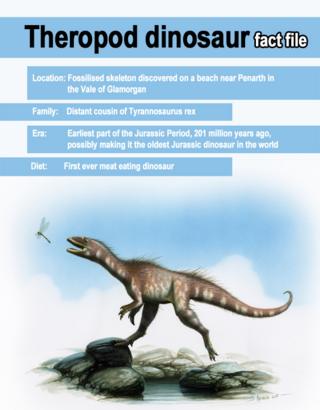 National Museum of Wales/BBC
Fact file on the dinosaur

David Anderson, from the National Museum Wales, said the exhibition, until September, will give visitors a "unique opportunity" to examine the fossilised remains of the first meat-eating dinosaur to be found in Wales.''