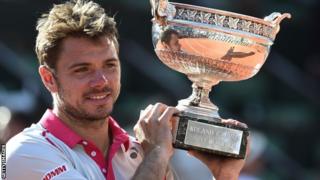 Djokovic had been hoping to become the eighth man to complete the set of all four major titles.

But the Serb will have to wait at least another 12 months before attempting to match the full set of major titles collected by Andre Agassi, Don Budge, Roy Emerson, Roger Federer, Rod Laver, Rafael Nadal and Fred Perry.

The 28-year-old had been a strong favourite to finally get his hands on the Coupe des Mousquetaires after beating nine-time champion Rafael Nadal and third seed Andy Murray, but he was outplayed by Wawrinka.

"It was an incredible atmosphere on court and I felt emotion like I never have before," said Wawrinka.