Women's World Cup 2015 has kicked off in Canada

The Women's World Cup 2015 kicked off on Saturday in Canada.

Germany showed why they're one of the big favourites by beating Ivory Coast 10-0 with a hat-trick from Celia Sasic.

And in the other game Norway wracked up a 4-nil win against Thailand.

It's the seventh Women's World Cup and will see a total of 24 teams battling it out for the first time.

For eight sides it will be their debut, or first appearance, in the competition.

England begin their World Cup campaign against France on Tuesday in Moncton. 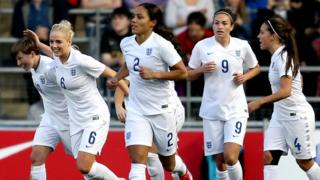 Germany and the United States will start as favourites with both sides hoping to win their third global title.

Up to a billion people are expected to watch the tournament.

Why are Arsenal Ladies football team so successful?