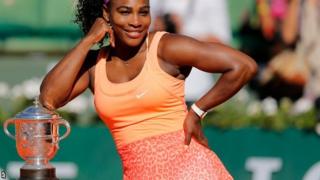 Safarova, playing her first Grand Slam final, led by a break in the decider but Williams won the last six games.

Victory at Wimbledon in July would see Williams hold all four major titles at once, having managed the feat already in 2003.

There had been doubts over whether the American world number one would even make it to court for Saturday's final after she had been struggling with flu.

"It makes this trophy really special," Williams said. "I really wanted it. I wanted to win so bad."

Ex-champ Serena out of Wimbledon