Officials in Oregon in America have recruited the help of a huge fake killer whale to help them to chase away a group of sea lions.

Large numbers of sea lions pass by the town of Astoria every year, but this time they have failed to move on as they normally would.

This has caused problems for the people who live near the port in the town because the sea lions are eating the fish that are usually caught by the locals.

But harbour officials came up with a plan to help scare them away. They used a giant fake orca whale which is almost ten metres long. 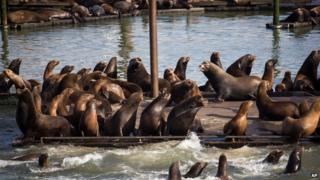 AP
The sea lions arrived in February as usual, but have this year failed to leave

Killer whales usually hunt sea lions, so the people who live there hope it might be an effective way to help encourage the sea lions to move on.

However the first attempt to use the orca ran into trouble when the motor inside it flooded with water.

Jim Knight, the Director of the Port, said: "It really is a sign of how desperate the measures are that we're taking to try and solve this problem".

A record number of sea lions have been saved in San Diego, US