Alton Towers theme park will stay closed until the cause of a rollercoaster crash is discovered.

The attraction's gates are shut for a second day while Health and Safety experts investigate what happened.

Nick Varney, chief executive of Merlin Entertainments, which runs the park, said it could only reopen when the investigation had finished.

Four people were seriously hurt in the collision on 'The Smiler' ride on Tuesday.

They were taken by helicopter to hospital.

Officials say one of the carriages with 16 people on it, crashed into another, empty carriage on a low section of the track. 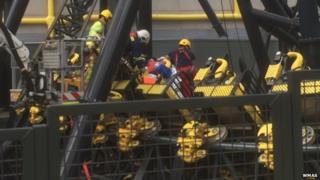 Nick Varney, head of Merlin Entertainments, thanked the emergency teams and apologised to those affected and their families.

He said: "This has been a terrible incident and a devastating day for everyone here.

"We have a very strong record of safe operation of our rides here at Alton Towers and it is our priority."

It's not known when the investigations will finish or when the park will reopen.