The Large Hadron Collider has re-started its scientific investigations after a two-year break for upgrades.

Buried below the ground on the France-Switzerland border, it's hoped the world's biggest experiment will give us big clues as to how the universe works.

For the last two years, physicists have been working on an upgrade to the giant machine, to make it much more powerful.

Scientists are now waiting for the first new data to begin flowing from the underground particle smasher.

The Large Hadron Collider (LHC) is a giant tube, like a vast doughnut - more than sixteen miles (27km) long.

It's run by Cern - the European Organisation for Nuclear Research - which investigates how our universe is constructed at the tiniest levels.

It is a bit like turning on a tap, but this is just the start

On Wednesday, the vast machine clattered proton beams together at much higher energies than were achieved when it was first switched on in 2010-2013.

The higher speeds should allow experts to hunt for signs of new scientific discoveries at the tiniest level imaginable - invisible to the most powerful microscopes.

On Wednesday morning, operators at the control room in Geneva carefully guided two stable beams of tiny proton particles around the LHC before slamming them into one another at particular points around the ring.

Huge detectors at these positions measure the energetic smash-ups, capturing the information to try to find exotic new particles in the sub-atomic wreckage.

Cern boss Rolf Heuer congratulated his staff, calling it a "fantastic achievement". But he warned them not to expect too much too soon: "It's not going to happen tomorrow... be patient." 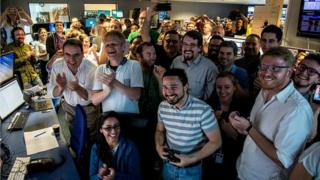 Cern
The experiment team celebrated when the first collisions occurred

But he added: "We are living through a fantastic moment."

Over the coming months, the collisions will happen at faster and faster speeds, enabling the scientists to gather more and more information about how everything that has ever existed fits together. 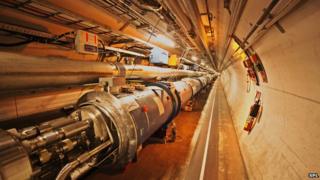 What is the Large Hadron Collider for?