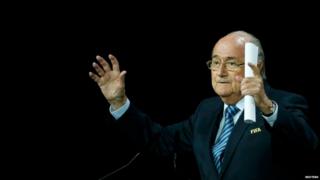 The head of Fifa - the organisation that runs world football - Sepp Blatter, has resigned.

In the past week Fifa has been hit by charges of corruption, which means being dishonest in a position of power.

On Wednesday 27 May, seven senior Fifa officials were arrested at a hotel in Switzerland and charged with taking bribes of millions of dollars.

Blatter faced calls to resign over the scandal, but was re-elected as president last Friday.

Read more: Who are Fifa and what do they do?

When he was re-elected, there were suggestions that some nations may have boycotted the World Cup in Russia in 2018, in protest.

"I am very much linked to Fifa and its interests. Those interests are dear to me and this is why I am taking this decision," he said today.

"What counts most to me is the institute of Fifa and football around the world."

There will now be a new election "as soon as possible" to try to find a new leader.