Matisse the dog and trainer Jules O'Dwyer won Britain's Got Talent 2015 on Sunday.

But whilst the pair celebrates their big win on the show not everyone thinks dogs performing on a TV show is a good idea.

The RSPCA's former chief vet, Mark Evans told Newsround that he thinks that we shouldn't make dogs do 'circus style acts' and that we're moving to an era of using animals for 'stunts'.

He thinks when it's done properly some dogs do enjoy it - but for a lot of dogs it can be dangerous and cause them unnecessary stress.

Newsround asked Britain's Got Talent if having performing animals on their show is right.

They said they "take welfare of animals incredibly seriously; working with owners and taking advice so they aren't caused harm or distress." 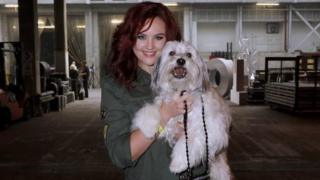 Ashleigh and her dog Pudsey won Britain's Got Talent in 2012

The BBC also added that animal welfare is extremely important and there are very high standards and clear rules for keeping animals safe and happy if they appear on any of their programmes.

Matisse is not the first dog to win Britain's Got Talent. Pudsey the dog and his trainer Ashleigh Butler won the competition back in 2012.

Ashleigh told Newsround that "Pudsey's welfare is always my number one priority when teaching him tricks and routines."

"If someone wants to teach their dog tricks and dog dancing, I always recommend going to dog training classes. They will be taught how to teach the tricks correctly and safely."

I think it is fine that dogs are on talent shows as long as the act is good.

I think we should have dogs on talent shows because its amazing what they can do! Sometimes dogs are better than humans. Dogs just bring something new to our screens.

It is not right to have performing animals on TV no matter what type of animal it is. It is a massive deal especially depending on how the animal is trained.

I think it's good to have dogs on talent shows as long as there trained in a friendly way.

I think that as long as the dog is happy it is fine.

I think it's good because we don't really see dogs on TV and it's a nice experience for a dog.

I think that it should be allowed because Matisse as you can see loved it. But if the owner treats the dog badly it is wrong!

I think that if the dogs are treated correctly and are trained in the appropriate manner then they could star in shows. However, if not they shouldn't be allowed to compete as animals get unnecessarily stressed.

I think it's good that dogs are on the talent shows because it is different then your normal dance group. If it's cruel, then how did two dog acts win Britain's Got Talent!

I really strongly feel that it is alright if the dogs express an obvious enjoyment in doing it and are not over worked. For breeds like Border Collies they need stimulation like agility or tricks but if they were scared of all the sound and lights its not ok. So sometimes its ok.

I think that dogs should perform but only if they enjoy doing it. If they don't like acting then they should not have to act.

I think dogs should be allowed to perform on television as the performing does not cause them any harm and the dogs look like they are enjoying themselves. Matisse looked happy all through his performance. The dalmatians were scared but the handlers where close by at all times and where ready to take the dogs off the stage at a moments notice. People should get proper training and help. I think it is a brilliant idea to have performing dogs as long as they are safe.

I think that dogs should appear on TV talent shows because they are really good at doing different tricks.

If the dog is treated correctly then it's completely fine but if the dog is forced against its will then its is very wrong.

Of course they should be allowed! I mean that's the second time a woman and a dog have won Britain's Got Talent.

I think if it is suitable for the animals then it is okay but only if they enjoy it.

I think animals should not be used as human entertainment because it is cruel if they are not enjoying it. What if the trainers are not well-trained?

Britain's Got Talent - where are they now?