A solar-powered plane has landed safely in Japan after being forced to stop its flight across the Pacific Ocean because of bad weather.

Poor weather conditions forced the Solar Impulse craft to head back to Nagoya, Japan, to land.

The aircraft, which set off from China on Saturday, had hoped to reach Hawaii by the end of the week.

Pilot Andre Borschberg will now wait in Japan for better weather before attempting to continue .

The plane will now be tied down and protected from the weather in a hangar, which is a large warehouse where airplanes are kept, while experts look for a new opportunity to cross the Pacific.

Solar Impulse is attempting to make the first journey around the globe by an aeroplane powered only by the sun. 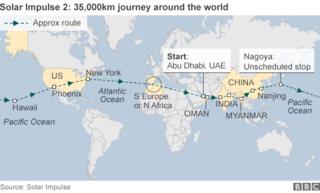