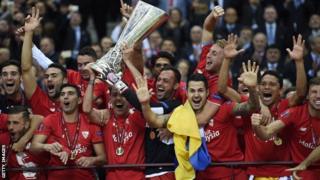 The team beat Ukrainian side Dnipro in a thrilling final in Warsaw, Poland.

Sevilla had to come back from a goal down as Nikola Kalinic headed Dnipro into an early lead.

The Spanish side responded with two quick goals as Grzegorz Krychowiak drove in before Carlos Bacca rounded the goalkeeper.

Ruslan Rotan's clever free-kick made it 2-2, but Bacca broke through to seal victory for Sevilla and with it a place in next season's Champions League.

Sevilla are the first to retain the Europa League trophy since it was rebranded in 2009, and they have now triumphed in the competition more times than any other team, having won the Uefa Cup in 2007 and 2008.

Sevilla coach Unai Emery said: "It has been a lot of work. The whole side worked very well."

"We deserve this. We have to enjoy it," he added.