Police in Switzerland have arrested seven senior officials from Fifa, the organisation that runs world football and organises the World Cup.

They're charged with corruption, which means being dishonest in a position of power. They're suspected of taking millions of US dollars in bribes.

They include vice-president Jeffrey Webb - who runs football in North and Central America and the Caribbean.

New York Times
An image from Zurich, Switzerland of the police raids happening

The Fifa members have been charged by authorities in America and could be flown to the US to face trial.

The Swiss authorities have also started a separate criminal investigation into the how the 2018 and 2022 World Cups in Russia and Qatar were chosen.

The Fifa presidential election will still take place on Friday despite the arrests. 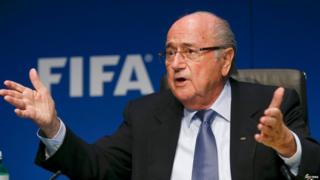 Fifa has been hit by accusations of corruption and wrongdoing in recent years.

The latest developments are another major blow, although Fifa spokesman Walter De Gregorio insisted the organisation is getting better.

"This is good for Fifa," he told a news conference following news of the arrests. "It hurts, it is not easy, but it confirms we are on the right track.