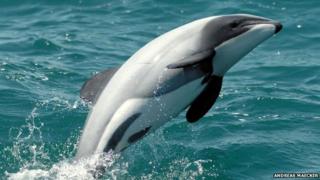 Andreas Maecker
Maui's dolphins are less than 1.5m long and only found off the west coast of New Zealand

The smallest and rarest marine dolphin in the world could be extinct within 15 years if protection is not stepped up, experts have warned.

Conservation organisation Nabu say there are fewer than 50 Maui's dolphins left on the planet now.

The organisation said fishing should be banned in the waters off New Zealand, where the species live.

Dolphins are often caught in fishing nets which can harm and even kill them.

"New Zealand has to abandon its current stance, which places the interests of the fishing industry above conservation," said Dr Barbara Maas from Nabu.

A spokesperson for the New Zealand minister for conservation said no comment would be made until after the scientific committee reported its findings and recommendations in June.

The number of dolphins has declined since the 1970s.