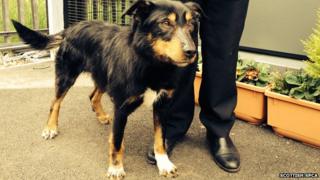 Scottish SPCA
The dog has been nicknamed Scafell

A dog found at the top of England's highest mountain has been reunited with its owner after a big search.

The black and tan male collie cross was picked up at the top of Scafell Pike in the Lake District a week ago by a couple of Scottish holidaymakers.

Staff at the Scottish SPCA in Glasgow nicknamed the dog Scafell and launched an appeal to find the owner. 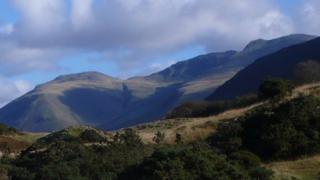 Cumbria Tourism
At 978m, Scafell Pike is the highest peak in England

Katrina Cavanagh of the Scottish SPCA, said: "Unfortunately, Sid wasn't microchipped so we couldn't contact his owner directly. Thankfully, he came forward following our appeal and arranged for Sid to be collected as he wasn't able to travel to Glasgow.

"The owner is a local sheep farmer and Sid is one of his working dogs.

"While he was surprised when he found out Sid was in Scotland, he was also very relieved he was safe.

"He's a lovely dog and we wouldn't have had any trouble finding him a home if we'd needed to as we had lots of offers.

"This is another example of why it's important for pets to be microchipped."

Meet the dog saved by a social network

Dog rescued after nearly 10 days stranded on a ledge