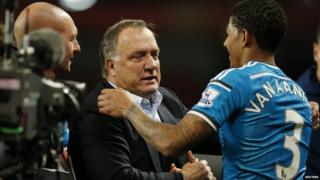 Dick Advocaat was brought to tears after his team Sunderland secured their place in the Premier League next season.

The 67 year old Dutchman got very emotional at the end of a tough 0-0 draw against third place Arsenal.

He only joined the team in March where he only had nine games left to save Sunderland from being relegated to the Championship.

The relegation battle is now between Hull City and Newcastle United and will be decided this Sunday.