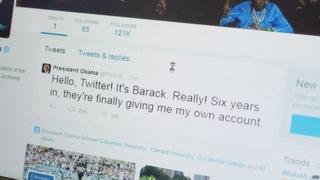 For years, The White House in America has used Twitter to communicate but President Barack Obama didn't have his own personal account.

That all changed yesterday when he set one up and tweeted his first message that has since been retweeted more than 200,000 times.

"Hello, Twitter! It's Barack. Really! Six years in, they're finally giving me my own account" he tweeted.

One of the first people to tweet him, was his wife Michelle who said "it's about time!".

So far, more than 1.5 million people have followed him.

Michelle Obama shows off her dance moves on US chat show