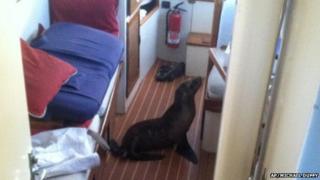 A sailor in America woke up to find an unusual stowaway had hitched a ride on his boat for the night.

Sailor Michael Duffy lives in San Diego in America, and was asleep on his boat, when he woke up to some strange sneezing and snoring noises.

When he went to take a look, he found a little sea lion pup curled up asleep on his swimming trunks.

Michael managed to wake up the sea lion and carefully directed it off the boat and towards the water.

He thinks it might have been looking for its mum but decided to have a little nap instead.