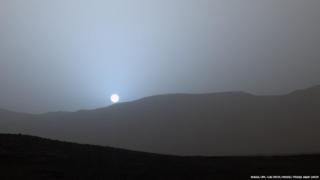 NASA's curiosity rover has sent back the first colour picture of a sunset on Mars, and it's blue!

The rover snapped some pictures of the sunset in between several dust storms on the planet while dust was still floating in the atmosphere.

And the reason it looks blue is because the reds and yellows from the sun were absorbed by the dust.

That meant the blue coloured light was able to get through the dust more easily and was picked up by the rover.

Mark Lemmon, a Curiosity science-team member from Texas A&M University said: "The colours come from the fact that the very fine dust is the right size so that blue light penetrates the atmosphere slightly more efficiently".

Since landing on Mars in 2012, the Curiosity rover has been sending back lots of pictures and data on the planet so we can learn more about it.