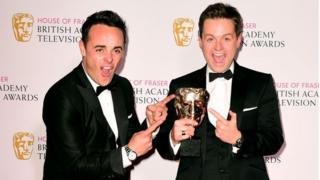 PA
Ant and Dec said they were "thrilled" by their victory

Ant and Dec have picked up two prizes at the Bafta Television Awards for the second year in a row.

Picking up their first prize, Ant told the audience: "What a great start to the show - for us. We're delighted with it, thrilled."