The plan to save the world's eels

More needs to be done to increase the number of eels around the world, according to conservationists.

Their numbers have dropped dramatically in the last 30 years. but experts have just completed the first year of a big project to protect the places where they live.

Jenny spoke to Matt Gollock, from the Zoological Society of London, about why the creatures are at risk.

The epic journey of eels

European eels are the great travellers that migrate thousands of miles.

It's thought the creatures start their journey as eggs in the Sargasso Sea, in the Western Atlantic near the Bahamas. 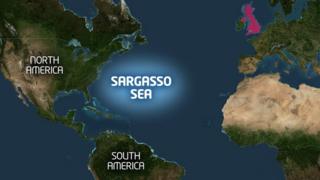 The Sargasso Sea in the Western Atlantic near the Bahamas

The eggs then hatch into transparent larvae called leptocephalus.

They then make the journey to Europe floating on the oceans currents.

Eel larvae from the Sargasso Sea can take up to three years to reach Europe.

By the time they reach our shores in the UK, they have developed into tiny glass eels that swim against the current into Europe's rivers. 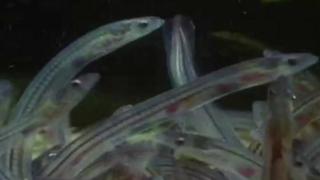 Tiny glass eels that swim against the current into Europe's rivers

In shallow waters they become elvers which move together upwards into estuaries and river systems.

While living in our rivers the eels are called yellow eels.

They can grow up to 1m long, with female eels being much longer than males. 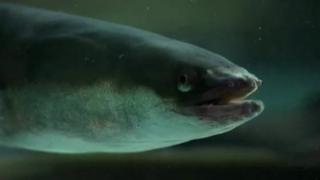 Eels can grow up to 1m long

Once back in the Sargasso Sea it's thought they spawn and lay eggs, but this has never been seen.

Experts believe the eel dies after it's reproduced.

Leah helps release thousands of eels into the wild

How does an electric eel control its prey?