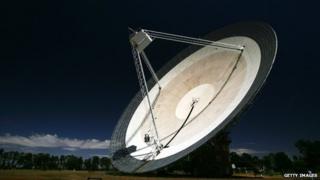 After 17 years of searching the galaxy, Australian scientists have discovered the source of mysterious signals hitting a telescope.

It turns out it was their own kitchen microwave!

Astronomers first detected strange signals in 1998 and thought they were linked to lightning strikes.

But the mystery was solved after scientists noticed that the telescope only picked up the signals when lots of people were working in the office.

After using a new piece of kit they found the signals matched those transmitted by a microwave, but only when the door was open before it had finished cooking.

Scientists pointed the finger at staff members who were too impatient to wait for the microwave to finish heating up their lunch.

Russian spacecraft 'to fall back to Earth on Friday'