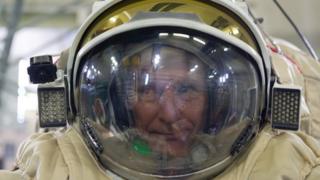 It means he is now qualified to fly in the Russian vehicle when it launches him to the International Space Station (ISS) for a six-month stay in November.

It also means he can be on standby for the next crew launch at the end of May - just in case someone has to drop out.

"Major Tim", a former army helicopter pilot, will be the first UK-born, European Space Agency astronaut to live aboard the ISS.

The test involved a six-hour session in a simulator at the Star City cosmonaut training complex near Moscow in Russia.

"This exam is the culmination of many months of training on the Soyuz spacecraft, which is our means of transport to and from the International Space Station," he told the BBC.

"Although it was a fairly long and gruelling test, it was also a very interesting and enjoyable experience. 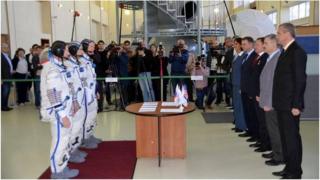 Tim Peake, nearest the camera (L), takes part in a ceremony to celebrate his Soyuz achievement

"We conducted all phases of flight: launch, rendezvous, docking, undocking, re-entry and landing - during which time our examiners kept us busy with several emergency situations. Unfortunately, though, we can't now relax - we have to do it all again in six months when we will be the prime crew for launch!" 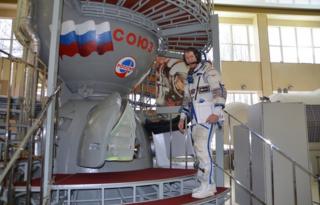 The Esa astronaut's mission to the ISS will be known as Principia, in honour of Sir Isaac Newton.