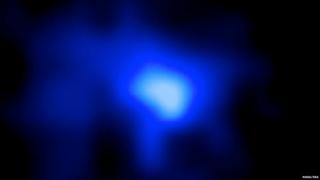 Scientists have captured a photograph of the oldest and most distant galaxy ever measured from Earth.

The speck of blue light is a whole galaxy, potentially containing millions of planets and stars.

It's known as a baby blue galaxy and has been given the nickname EGS-zs8-1. 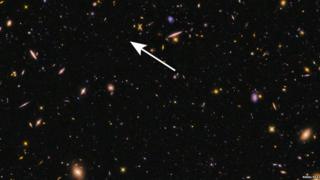 Light from the galaxy has taken 13.1 billion years to reach Earth, so the photograph is like looking back in time at how the galaxy looked back then.

A long time ago; a galaxy far, far away

Light can travel 5.8 trillion miles in one year - so the fact that it has taken more than 13 billion years for the light to reach us means the galaxy is trillions upon trillions of miles from Earth.

Scientists from Yale University and the University of California Santa Cruz used three different telescopes to spot the galaxy and then calculate its age, and how far away it is from our galaxy, the Milky Way.

Pictures: Our universe captured by Hubble

By comparing shifts in the light they captured, they were able to work out that the photo shows the galaxy around 670 million years after the Big Bang.

In the photograph, the galaxy "has already built more than 15% of the mass of our own Milky Way today," said Yale astronomer Pascal Oesch, who led the study.

"But it had only 670 million years to do so. The universe was still very young then."

The findings were published in Astrophysical Journal Letters.

Incredible pictures of galaxies and stars released by Nasa

New galaxy is 'most distant' discovered yet