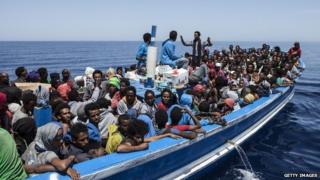 More than 5,800 migrants have been rescued after crossing the Mediterranean sea over the weekend.

They were picked up from wooden and rubber boats, by Italian and French rescue ships.

It's expected many more migrants will make the dangerous journey in the coming weeks as smugglers take advantage of calmer weather.

Each year thousands of men, women and children attempt the dangerous journey across the Mediterranean Sea to Europe.

Ayshah visited Sicily to find out more about the problems migrants face. 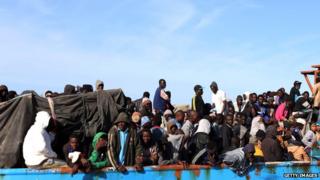 Getty Images
The journey across the Mediterranean sea is very dangerous

But the journey is very dangerous and hundreds of people have died trying to reach Europe.

Criminal gangs and smugglers pack too many people into small boats, which leak and often sink and there's nobody to make sure the journey is safe.

At an emergency meeting last month some of Europe's top leaders said they would give more money to help rescue missions.