Donations to the Disasters Emergency Committee appeal to help those affected by the Nepal earthquake have reached £33 million.

The money given by the UK public will be used to help the estimated eight million people in need.

Many lost their homes in Saturday's earthquake and need food, water, shelter and medical care. 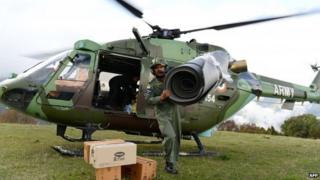 AFP
Aid is being delivered by helicopter

Nepal has appealed for countries to provide more helicopters to help the relief effort in the mountains. 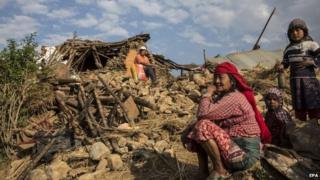 EPA
These people in Kathmandu have lost their home

Damage caused by the quake has made it very hard for rescue teams to reach people trapped in remote areas.

But on Thursday a teenage boy was pulled from a collapsed building where he had been trapped for five days.

A huge crowd of people cheered as the boy was freed, and later the rescue worker who helped him was hoisted into the air to celebrate.

The boy, named Pemba Lama, has been taken to hospital for treatment.

Meanwhile rescuers are still trying to get to some of the more tricky areas to reach in Nepal to help the people there.

The United Nations say eight million people have been affected in Nepal - more than a quarter of the country's population.

The children living in camps in Nepal after earthquake

Boy rescued from collapsed building in Nepal after 5 days