Chelsea beat Leicester to close in on League title 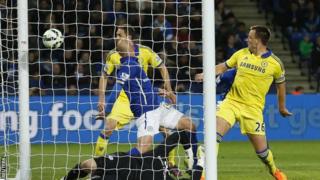 Reuters
John Terry's goal was his seventh of the season

Chelsea are just one win away from the Premier League title after an impressive comeback to beat Leicester City on Wednesday.

In-form Leicester fought hard and took the lead in the first half with a Marc Albrighton strike.

Chelsea responded in style to come back and take the win.

It means they will be crowned champions for the first time in five years if they beat Crystal Palace at Stamford Bridge on Sunday.

Didier Drogba scored early in the second half to level things and goals from captain John Terry and Ramires wrapped up the win.

The fight's not over for Leicester though.

This defeat ends their run of four straight wins that lifted them out of the relegation zone.

Getty Images
Marc Albrighton's goal was his first for Leicester - he had not scored in the Premier League since netting the 20,000th goal in Premier League history for Aston Villa in December 2011