After more than 10 years in space and four years orbiting Mercury, Nasa's Messenger mission has ended in explosive style.

The spacecraft, that had run out of fuel, was deliberately crashed into the planet at 8,750mph.

The high-speed collision, at more than ten times faster than sound, destroyed the little spacecraft.

Scientists on Earth confirmed the impact at around 8pm on Thursday when Messenger's communication stopped.

Using the last reserves of the craft's helium gas coolant, Nasa scientists steered the Messenger out of orbit on a collision course with Mercury's surface.

According to calculations the 3m craft, weighing about half as much as a small car, will have made a crater the size of a tennis court, near the planet's north pole.

No atmosphere on Mercury

Messenger was able to hit Mercury's surface because the planet has no thick atmosphere to burn up incoming objects.

For this same reason the planet is struck by similarly-sized meteors once every month or two - and those arrive ten times faster. 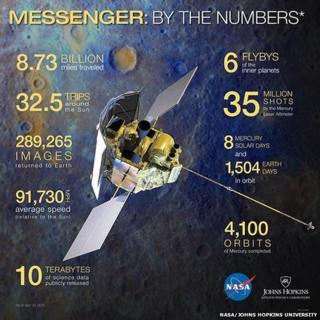 "Today we bid a fond farewell to one of the most resilient and accomplished spacecraft to ever explore our neighbouring planets," said Sean Solomon, one of the leaders of the Messenger project.

After reaching Mercury in 2011, Messenger has done much more than its original mission plan of one year in orbit. 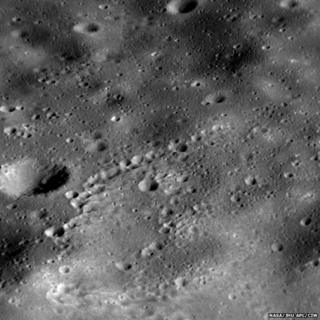 It sent back more than 270,000 images and 10 terabytes of scientific measurements.

It found evidence for water ice hiding in the planet's shadowy polar craters, and discovered that Mercury's magnetic field is weirdly off-centre, shifted along the planet's axis by 10% of its diameter.