Help has begun to reach people trapped in remote areas of Nepal after the devastating earthquake on Saturday.

The quake killed more than 5,000 people and now many survivors are in desperate need of food and clean water.

Leading charities say up to two million children have been affected by the earthquake and an emergency appeal here in the UK has already raised over £19 million. 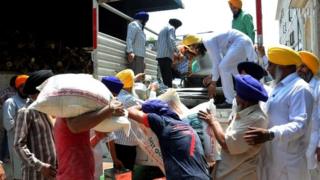 EPA
Volunteers in Amritsar, India, load a truck with food to take to quake survivors in Nepal.

Trucks full of food like rice, oil and sugar are now trying to get to villagers in hard to reach mountain areas.

And helicopters are carrying emergency supplies of food and medicine to those that cannot be reached by road. 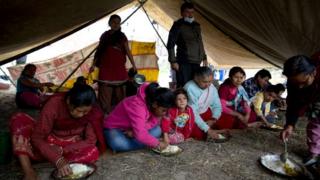 AFP
Many people are still living in tents because their houses were destroyed.

Many villages in the area have been almost completely destroyed by the massive quake.

And hundreds of thousands of people are having to live in temporary camps, in very tough conditions, with very little food and water.

The United Nations says eight million people have been affected by the massive earthquake in Nepal - more than a quarter of the country's population.