What video game would go in your hall of fame? 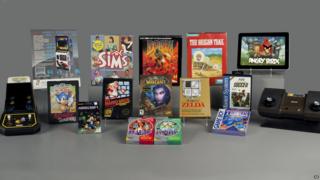 Which is better? Minecraft or FIFA? Pac Man or Pokemon? Sonic or Super Mario?

That's the virtually impossible question that a panel of gaming experts have to answer.

Thousands of fans have voted to produce a list of 15 of the greatest games of all time.

They've been shortlisted for the first ever World Video Game Hall of Fame in America.

We'll know which game's made it into the exclusive club on 4th June.

You told us which game was your favourite.

My favourite game is Animal Crossing: New Leaf because there's always something new you can do.

I like FIFA because you can make transfers. You can also make your own team and develop it.

The video game that I would choose to go in the hall of fame is Mario Kart because it's a really fun game.

I like FIFA because I love football and I also like Minecraft because you can explore new creatures and new castles.

I think Pokemon is the best game because you can catch as many Pokemon as you want.

Minecraft is my favourite game because you can do whatever you want and you can fight different monsters.

I love Minecraft, Plants vs. Zombies and Angry Birds.

Kingdom Rush because I love the feel you get when you play the game.

I think Crash Bandicoot should be nominated. It is the best game ever, I used to play it when I was little and I loved it.

I think that it should be Minecraft because it's like lots of games in one. You can modify it and when you do it's like playing a completely different game! Definitely Minecraft!

My favourite game is Terraria.

Tekken, Spyro or Dino Crisis are my favourite games but from the list Mario bros has to be the best game because it's challenging and fun. Even though it's been around for years it's still an Amazing game.

FIFA because I'm quite good at it and it's just a great game!

Sims is my favourite game I've been playing it for ages. I had some of Sims 2, all of Sims 3, and now I'm on to Sims 4. I just love it that much.

I think FIFA because it is really fun to play and you can learn new skills from it.

My game to make the video game hall of fame is Legend of Zelda Ocarina of Time because instead of following a path you explore a fantasy world.

Minecraft and The Sims 3 and 4. I like these games because they're really addictive and enjoyable.

My favourite game is not listed but mine is Animal Crossing New Leaf because there's something new you can do everyday and so much fun I play on it for hours and hours.

I would put Terraria in the hall of game because it is awesome!

This chat page is now closed. Thanks for all your comments