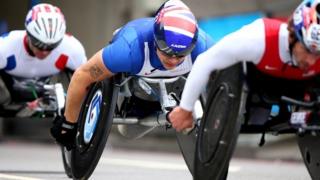 Britain's David Weir missed out on a record-breaking seventh London Marathon win as he lost out in a close finish to American Joshua George.

Wheelchair racer David had taken the lead in the closing stages of the race, but Joshua powered through to win in 1 hour 31 minutes 31 seconds.

The London Marathon is one of the most famous marathons in the world, raising record breaking amounts for charity, and today's marathon is the biggest in the event's history.

Nearly 40,000 people are being cheered through the streets of the capital.

And joining them on the 26.2mile route is Blue Peter's Linsey, who's running her first ever marathon.