Barcelona will face Bayern Munich in the Champions League 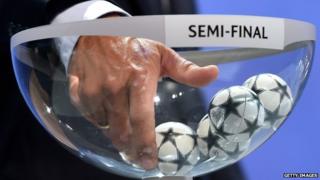 The Champions League semi-final draw has been made.

It will be a big moment for Bayern Munich boss Pep Guardiola because he used to manage Barcelona.

The final will be played at Berlin's Olympic Stadium on Saturday, 6 June.