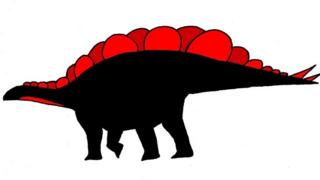 Stegosaurs may have had quite different shaped plates, depending on whether they were male or female.

The bony plates that ran down the backs of these animals made them one of the most famous dinosaur species.

But what their purpose was is a bit of a mystery.

Now, some experts think that males could have had rounder, broader plates, while females might have had narrower, taller plates. 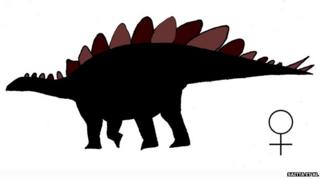 As well as the bony plates, which were in two rows along the back, they also had bony spikes on the end of their tail.

Evan Saitta, from Bristol University, UK, examined the remains of stegosaurs preserved in a dinosaur "graveyard" in Central Montana, America.

The jumble of fossils contained at least five individuals and he compared their skeletons with those of other specimens of the same species - Stegosaurus mjosi - from other collections.

The research shows that the plates fell into two varieties.

"Simply looking at them by eye, you can identify two varieties. But then you can also measure them and do a more quantitative analysis and demonstrate that, yes, there are two distinct varieties of plates," Mr Saitta told the BBC.

He suggests that the males and females of the same species might have evolved differently.

He added: "We know from modern animals that males typically invest more into their ornaments than do the females. In this case, the broader variety reaches sizes 45% larger in surface area than do the tall plates. And I argue that these wide plates would create a great 'billboard' for male stegosaurs if they were using them to attract a mate." 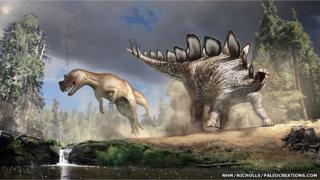 But not everyone agrees with the research, which has been published in the journal PLoS ONE.

London's Natural History Museum is currently doing in a big stegosaur study based on what is thought to be the most complete fossil stegosaur specimen in the world.

The museum's Paul Barrett said he thought the new research was very interesting but that he was not quite convinced.

"I'd like to see a lot more information on the graveyard site itself, the different sizes of the specimens, how they were arranged in the ground, more detail on the geology, and on the analyses that were done," said Paul.

The museum is going to test different plate theories, including the idea that the plates were like radiators, helping to cool the animals when they got too warm.