Each year thousands of men, women and children attempt a dangerous journey across the Mediterranean Sea to Europe.

But the journey is very dangerous and hundreds of people have died trying to reach Europe.

Why is the journey so unsafe?

Criminal gangs pack too many people into small boats, which leak and often sink. There's nobody to make sure the journey is safe.

The unsafe boats mean people have lost their lives at sea.

Ayshah has been to Sicily, an island near Italy, where rescue boats arrive every day, to find out what's being done to help.

Why do migrants risk the journey?

The United Nations says 13,500 migrants have been rescued trying to reach Europe so far this year.

On 18 April a boat carrying up to 900 people sank. Authorities say 28 people were rescued; but many more died. 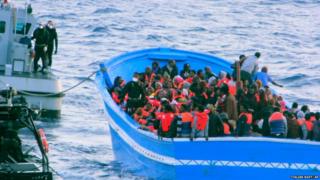 Italian navy/ap
This is just one migrant boat that was rescued by the Italian navy. The navy provided life jackets to migrants on the overcrowded boat.

Reuters
Thousands of people have died making the dangerous journey. The coastguard searches for survivors in the water. 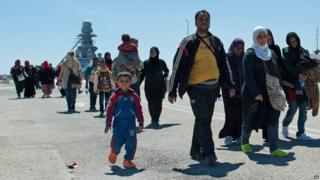 AP
The future is uncertain for those that do make it to Europe. They do not know whether they will be allowed to stay.
Where are the migrants from?

Most migrants travelling to Italy are from Eritrea, Mali and Nigeria. They travel through Africa to Libya.

From Libya they board boats, many of which are not safe, and head to Italy.

There are also a huge number of migrants trying to reach Europe from Syria, trying to escape a civil war in their own country.

Who is your top player from the Euros so far?

How are you feeling about starting secondary school?