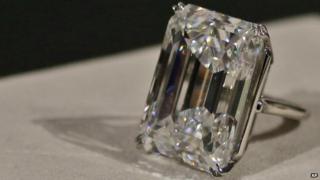 A flawless diamond has sold for $22.1million (almost £15million) at an auction in the United States.

The gem, originally mined in South Africa, was snapped up by an anonymous buyer three minutes after it went on sale.

The diamond took more than a year to cut, polish and perfect.

Diamonds are weighed in carats - and this particular gem weighted 100 carats.

Only six perfect diamonds weighing more than 100 carats have been auctioned in the past 25 years, according to Sotheby's auction house.

Gary Schuler, the head of Sotheby's jewellery department in New York City, said the diamond was "the definition of perfection".

"It's so transparent that I can only compare it to a pool of icy water," he said.

Two years ago, a flawless pink diamond known as the Pink Star set a world record price for a gemstone at auction when it sold for $83million in Geneva.