Rosetta snaps huge jet of dust as it bursts from comet 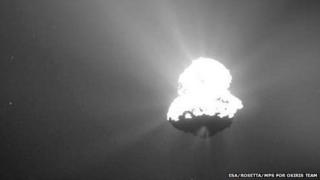 A massive 900m burst of dust and gas has jetted out of a comet and it's all been caught on camera.

The comet, named 67P, is throwing out lots of material as it warms up on its journey towards the Sun.

The ball of rock and ice is being photographed by the Rosetta spacecraft, which is following it on its journey.

Rosetta was sent into space by the European Space Agency and is about 60 miles away from the comet, but still got these amazing pics.

Scientists say this was a special sighting: "No-one has ever witnessed the wake-up of a dust jet before," said scientist Holger Sierks from the Max Planck Institute for Solar System Research, in Germany.

Over the next few weeks lots more jets of dust are expected, as the comet travels closer to the Sun.