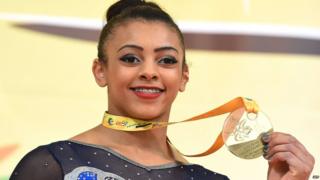 Ellie Downie has won a bronze medal for Great Britain at the European Gymnastics Championships.

The 15-year-old gymnast became the first British woman to win an international all-around medal in her first senior year.

She told BBC Sport: "I'm over the moon. I never thought coming here I'd be among the medals."

"I was hoping for a top six or eight finish - it's just absolutely amazing."