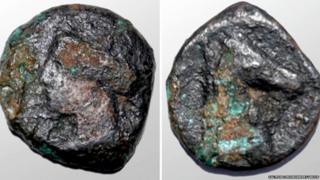 Saltford Environment Group
The coins, were used by traders in the Bristol Channel

It was found two years ago after flooding along the River Avon near Bath.

Researchers say the 20mm coin has only just recently been examined.

On one side of the coin is a horses head - on the other an image of a goddess.

Experts think it shows details of traders in the Bristol Channel.

Several similar examples have been found in the past but only near the coastline. 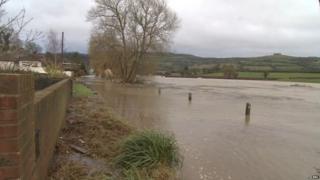 It has been verified by the British Museum and is understood to be a Carthaginian coin.

It was minted around Sardinia in 300-264 BC. The owner wants to stay anonymous but has allowed it to be included in a history project of Saltford where the coin was found.

Dr Sam Moorhead, said ''It is certainly one of the earliest coins found in Britain. The Saltford coin does suggest that there was maritime activity up the Bristol Channel as well and we can imagine traders entering the River Severn."