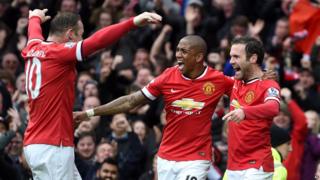 But United replied quickly with Ashley Young getting the equaliser and setting up the second for Marianne Fellaini to end the first half 2-1.

It was all down hill from there for City, conceding another two goals, with Juan Mata and Chris Smalling hitting the back of the net for the Red Devils.

Aguero nicked a late goal back to give City some hope but the game finished 4-2 and means City stay fourth in the table while United keep up there outside chance of winning the title by staying in third.