Malala Yousafzai gets asteroid named after her 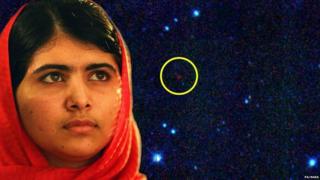 Malala Yousafzai has had an asteroid named after her by the US space agency Nasa.

Nobel Peace Prize winner Malala, who's originally from Pakistan, rose to fame after her efforts to increase awareness about girls' education in her home country.

The asteroid sits in the main asteroid belt between Mars and Jupiter.

Nasa say they hope the decision will be an inspiration to others. 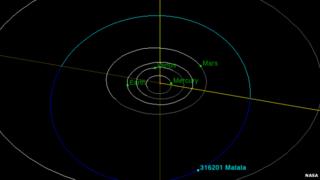 NASA
The asteroid is a full four kilometres wide

NASA's Amy Mainzer, who discovered the asteroid, said she wanted the naming to be an inspiration to young women.

Writing on the Malala Fund Blog, Mainzer said she wanted the naming to be an inspiration to young women.

"We desperately need the brainpower of all smart people to solve some of humanity's most difficult problems, and we can't afford to reject half the populations." 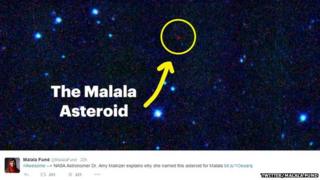 In October 2012 Malala was shot whilst getting on her school bus in Pakistan.

She's become a worldwide sensation, speaking in front of the UN and elsewhere about the right to education.

And although Malala may never get to see her asteroid, it's rather nice to know it's up there.

Newsround's special programme all about Malala