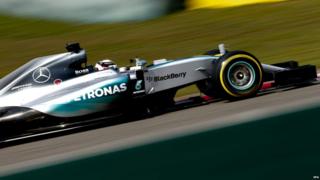 Lewis Hamilton took a controlled victory for Mercedes in the Chinese Grand Prix.

The British world champion's win stopped the Ferrari challenge in its tracks in Shanghai.

Nico Rosberg was second and later accused team-mate Hamilton of trying to slow him down into the chasing Sebastian Vettel - a claim Hamilton denied.

Ferrari's Vettel and Kimi Raikkonen were third and fourth respectively.

Hamilton's second victory in three races this season - and his eighth in 10 grands prix dating back to Italy in September last year - extended his championship lead to 13 points over Vettel, whose advantage over Rosberg was cut to four.

Kids learn how to get a job in Formula 1