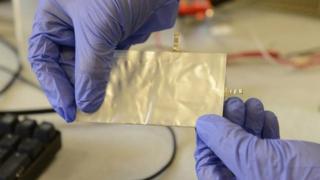 Scientists have built a test version of a bendy battery made from aluminium, which they say is better than current batteries.

The guys who've designed it say it's cheaper, more flexible and faster to charge than a normal battery.

Special liquid salt surrounds the materials that create the electricity inside the battery which can recharge in less than a minute,

Developers say the battery is exciting - but still in very early stages.