A general election gives adults in the UK the chance to have a say on who runs the country.

But how does it all work? Newsround's here to explain...

Why did MPs vote for a December general election?

How does the government trigger a general election?

General elections are supposed to be held every five years under something called the Fixed Term Parliaments Act.

But if the government wants to trigger an election earlier than that, the simplest way to do it is to call for one under the Fixed-term Parliaments Act.

This route requires at least two-thirds of MPs to agree to it by holding a vote. 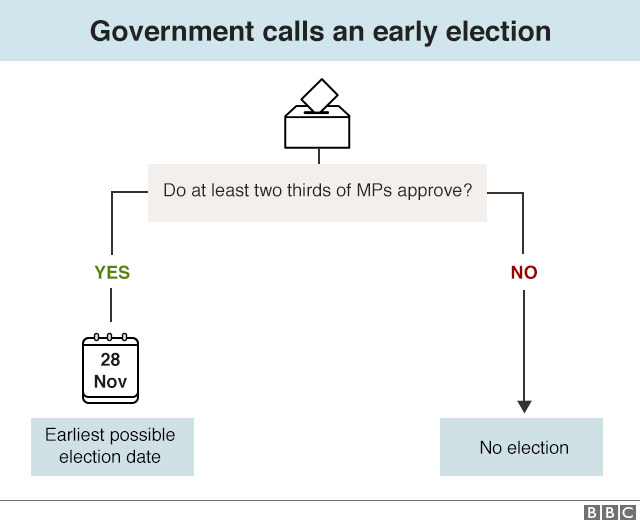 How does a general election work?

The UK is divided into 650 areas, called constituencies.

Each area has a person called a Member of Parliament (or MP), who represents it in the House of Commons in London.

When you turn 18, you can vote in a general election to choose who you want to be your MP.

So a general election is really 650 individual elections that all happen on one day, across England, Wales, Scotland and Northern Ireland. 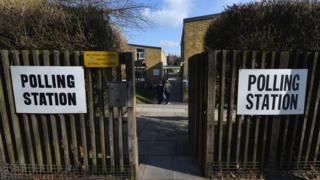 What is a by-election?

A by-election is when an election is held to choose an MP for one particular constituency in between general elections, because the MP currently holding the position can no longer continue in the job

On election day, people go to polling stations to vote.

They get a ballot paper, which lists all the candidates - that's the people who want to be that area's MP.

Each person has one vote. They mark the ballot paper with a cross next to the name of the candidate they most want to represent them.

The candidate who gets more votes than anyone else becomes the MP for that area. This is called first past the post.

That candidate wins a seat in the House of Commons.

How is a general election won? 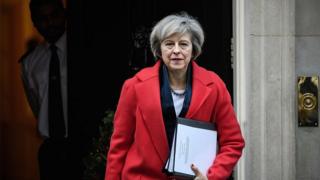 To win, a political party needs to reach the magic number of 326 MPs, which is half of all of them plus one.

If a political party manages to do this, it is called winning an overall majority, as it has won more seats than all of the other parties added together.

If this happens, the Queen will invite the leader of this party to form the new government.

The party leader will become the prime minister.

What happens if a party doesn't win 326 MPs? 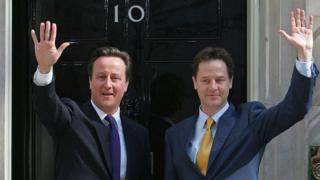 When there is no clear winner - in other words, no political party wins more seats that all the other parties put together - this is what is called a hung parliament.

If this happens, there are two options.

The first one - the bigger parties can try to join up with another party so that together they have 326 or more seats. They can then rule the country together. This is called a coalition government.

The government in power before the election gets the first chance at doing this.

This happened in 2010. The Conservatives joined up with the Liberal Democrats (who won 57 seats) to create a government together. 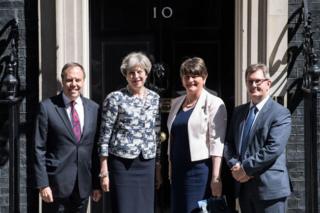 Carl Court
After the 2017 General Election, Theresa May's Conservative Party made a deal with the Democratic Unionist Party so they'd have enough support in Parliament

The second one - if the party that won the most MPs, but without getting an overall majority, does not want to join with another party like this, they can try to rule as a minority government.

They can work to reach agreements with smaller political parties to support them in parliament, or try to get support from other MPs for what they want to do as they go along. But if they don't get that support, they risk getting defeated in the House of Commons.

This happened in 2017. The Conservatives won the most MPs, but they did not have an overall majority. They won 306 seats.

So they had to form a partnership with a smaller party, the Northern Irish Democratic Unionist Party, who agreed to support them on some important votes, but did not go into coalition.

If neither of these options work for any party, then there will be another election.

How often do general elections happen? 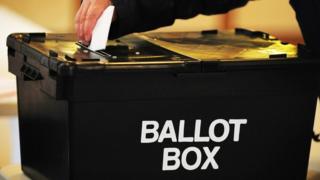 By law, a general election must happen at least once every five years, but the government can call to have one sooner than that.

If one is held earlier than expected - like the government wants to do this time - this is called a snap election.

Politicians across the UK will now have their work cut out to win (or keep) their seat in the House of Commons.

For several weeks, they will be knocking on doors, debating with rivals and delivering speeches to try to convince adults across the UK to vote for them.

They will publish manifestoes - lists of what they plan to do if they are voted into power - so people can decide if they want to vote for them. 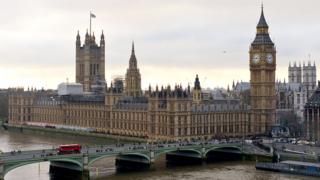 Getty Images
The UK government is based here, in the Houses of Parliament in London

It is a hugely important decision for voters as the politicians they choose will work in the Houses of Parliament and regularly debate on big issues that affect how the country is run.

General Election 2015: As it happened

Democracy: How is the UK run?