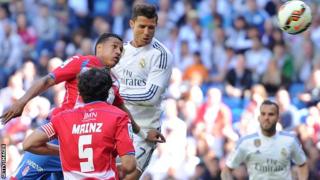 The world player of the year's first three came within eight minutes following Gareth Bale's opener, putting Real 4-0 up at the break.

Ronaldo's fourth came in the second half between two from Karim Benzema.

Robert Ibanez got a goal back for Granada before Diego Mainz's own goal, with Ronaldo heading his fifth late on. 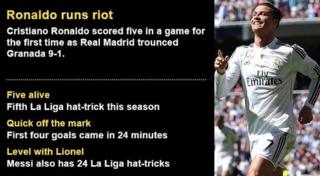 The ex-Manchester United forward scored five in a game for the first time, helping put Real one point behind La Liga leaders Barcelona, who have played a game less, while improving their goal difference.