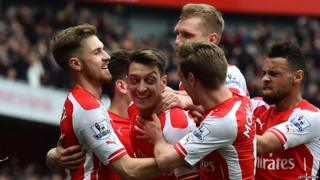 The Premier League was back on Saturday after the international break and it picked up where it left off - with a bang!

There were seven matches with important games for teams chasing Champions League spots and for those trying to avoid relegation.

So who came out on top? And which teams had a day to forget?

Newsround has all you need to know.

Arsenal tightened their grip on a place in the Premier League's top four while inflicting damage on Liverpool's Champions League hopes with a convincing victory at Emirates Stadium.

The Gunners set the platform for a vital three points with a devastating burst of three goals in the last eight minutes of the first half from Hector Bellerin, Mesut Ozil and Alexis Sanchez.

Raheem Sterling battled hard and won a late penalty from which Jordan Henderson pulled a goal back for Liverpool.

In reality, however, this was little other than an afternoon to forget for a poor Liverpool, who had Emre Can sent off for two yellow cards before Olivier Giroud delivered the final blow with a spectacular fourth goal for Arsenal in the closing seconds.

Struggling QPR convincingly beat West Brom to record only their second Premier League away win of the season and move within a point of safety.

Eduardo Vargas struck from long range before Charlie Austin headed a 16th league goal of the season and Bobby Zamora's superb lob made it 3-0.

Victor Anichebe headed a goal back for West Brom, who had Youssouf Mulumbu sent off for an elbow on Joey Barton.

But Barton wrapped up victory from close range after a counter-attack.

QPR move up to 18th in the table, a point and a place behind fourth-bottom Sunderland, who host Newcastle on Sunday.

Charlie Adam scored from inside his own half but could not prevent Stoke from losing, as Chelsea went seven points clear at the top of the Premier League.

Adam hit a sensational equaliser for Stoke, spotting goalkeeper Thibaut Courtois off his line and smashing in from around 65 yards out.

Earlier, Eden Hazard had stroked home a penalty for the hosts after Cesc Fabregas was tripped in the box.

The only sour note for the home side was an injury to striker Diego Costa, who came on at half-time, but lasted only 11 minutes before he went off holding his hamstring.

Manchester United defeated Aston Villa to move above Manchester City and into third place in the Premier League.

Wayne Rooney added a second goal when he spun and fired into the top corner.

Villa's Christian Benteke pulled one back with a low strike before Herrera scored his second with a side-footed finish in injury-time to seal the win.

Esteban Cambiasso's superb 20-yard left-footed strike gave Nigel Pearson's side the early lead, but the Foxes' David Nugent then had a penalty saved.

West Ham enjoyed a long spell of possession after that and deserved Chiekhou Kouyate's equaliser.

Kouyate hit the post in the second half, but King turned in Jamie Vardy's mis-hit shot with four minutes to play.

It was the Wales midfielder's first goal of the season, and ended Leicester's run of eight league matches without a win, stretching back to 10 January.

Nigel Pearson's side remain bottom of the table, four points from safety, but the attacking threat they showed will give their manager hope that they can yet avoid the drop.

Paul McShane's finish after a Jake Livermore free-kick gave the Tigers hope but David Meyler was soon sent off for a high tackle on Kyle Naughton.

Southampton's hopes of a European place were damaaged as Everton won their third consecutive Premier League match thanks to Phil Jagielka's close-range finish.

Ronald Koeman's side enjoyed plenty of possession and chances but they were unable to find a way past Everton goalkeeper Tim Howard.

Jagielka's goal from a corner in the 16th minute ultimately proved decisive.