The restart of the Large Hadron Collider (LHC) is now under way for the first time since 2013.

It's the world's biggest experiment and scientists hope will lead to a deeper understanding of how the universe works.

For the last two years, physicists have been working on an upgrade to the giant machine.

The LHC is a 16-mile-long tunnel, which sits 100m below ground on the border between France and Switzerland. 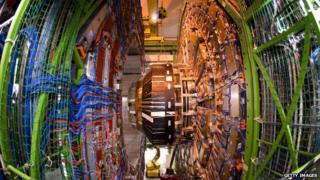 It works by smashing tiny particles together at close to the speed of light.

Actual collisions will not begin for at least another month, but they will take place with nearly double the energy the LHC reached during its first run.

"It's fantastic to see it going so well after two years and such a major overhaul of the LHC," said Rolf Heuer, director general of Cern - the European Organisation for Nuclear Research which runs the LHC.

"I am delighted and so is everyone in the Cern control centre," he added.

In 2012, the LHC produced a major breakthrough - by finding the probable explanation for why things physically exist - something scientists have been struggling with for decades.

Large Hadron Collider to shut down for 2 years