Counting the UK's rabbits and hares

Scientists are asking the public to report sightings of rabbits and hares, as part of a conservation project.

It's easier to spot the animals in the spring when the breeding season is under way.

The Mammal Society, who want to gather the data, say hares might be declining in some parts of the UK.

Rabbit numbers have also fallen in some areas where there have been outbreaks of disease. 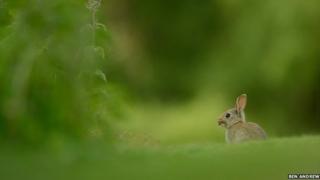 But in other areas, populations are so big that they're thought of as pests by some people.

They want people to send in sightings of rabbits and hares across the countryside, including parks, fields and mountains, so they can make a map of their population in the UK.

Dr Fiona Mathews, from the Mammal Society, said: "We have very poor information on rabbits and hares - and it's important to know if numbers are going up or down."

The data will be used in a national atlas of mammals to support future conservation and research projects.

Real-life Easter bunnies in need of a new home