Scientists have confirmed that a tiny bird migrates across the Atlantic Ocean, covering distances of around 1,500 miles in less than three days.

The Blackpoll Warbler weighs the same as a £2 coin but it covers up to 1,721 miles, flying non-stop to find a warmer home in winter.

Starting in the north, in eastern Canada and north east America, it flies south across the ocean to spend winter in parts of the Caribbean and South America.

The researchers used tiny, harmless beacons, called geolocators, attached to the backs of the birds, to track where in the world the little creatures flew. 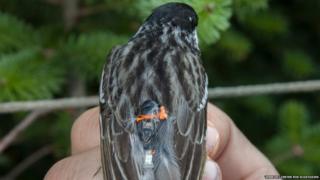 Bill Deluca, who led the study, said: "We're really excited to report that this is one of the longest non-stop overwater flights ever recorded for a songbird."

He said that the research "finally confirms what has long been believed to be one of the most extraordinary migratory feats on the planet."

Other songbirds like albatrosses and gulls are known for migrating a long way across the sea.

But the Blackpoll Warbler lives in forests - so it steps way out of its comfort zone in crossing huge oceans non-stop.

Ryan Norris, who also worked on the study, said these little birds have to eat huge amounts before they leave.

Unlike seabirds, he said blackpolls "don't have the option of failing or coming up a bit short. It's a fly-or-die journey that requires so much energy."

The research, by scientists at the University of Massachusetts Amherst, with colleagues at Canada's University of Guelph, Ontario, the Vermont Center for Ecostudies and other institutions, was published in the journal Biology Letters.

Secret of why many birds fly in V-formation revealed