England draw against Italy in friendly 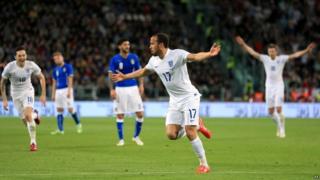 England are now unbeaten in nine games after drawing 1-1 with Italy in Tuesday's international friendly.

The Three Lions went behind in the first half following Graziano Pelle's header but pulled it back in the 79th minute thanks to a spectacular strike from Andros Townsend.

Manager Roy Hodgson experimented with his team throughout the game, with Theo Walcott used in a forward role rather than on the wing.

Hodgson will get his players back together in June for a friendly against the Republic of Ireland.