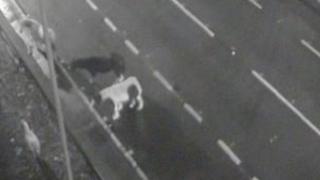 A motorway in Birmingham had to be closed after horses were spotted on the road.

Motorists were brought to a standstill after police officers shut the M6 in both directions.

Three horses and a foal were found on the northbound carriageway.

Police said all four horses had now been returned to a field.

Lioness who gives her handler a big hug