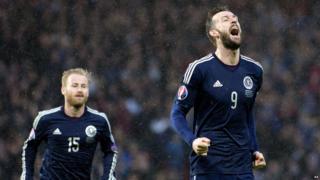 Northern Ireland and Scotland both secured wins this weekend to keep them in the race to qualify for the 2016 European Championships.

Both sides now sit one point behind the leaders in their respective qualifying groups. 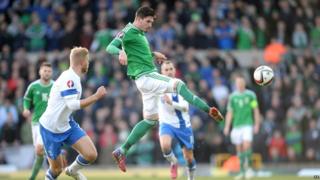 PA
Kyle Lafferty has scored a goal in each match he has played in, pushing Northern Ireland towards the top of their group

England, Wales, Scotland, Northern Ireland and the Republic of Ireland have never qualified for the same major international tournament before, but all remain hopeful of reaching next summer's tournament in France.

All five teams have had promising starts, and the finals have now been expanded from 16 to 24 teams, meaning there is more of a chance to play in the finals. 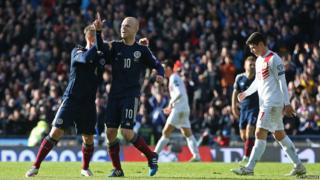 Getty Images
Scotland are in third place in their group level on 10 points with Germany, and only one point behind leaders Poland

The top two teams from each of the nine qualifying groups will go through to the finals.

Host nation France will automatically go through to the finals, and the teams who finished third in each group will play off against each other to decide who gets the last places.